Novgorod and back, without leaving Moscow

One of the quirks of the Russian system is that you can sometimes stave off the tedium of re-registering whenever you leave a gateway city like Moscow or St Petersburg. Plan an out-and-back excursion aboard overnight trains to any of the many ancient and historic provincial cities. You’ll spend a night each way, tucked into a comfortable sleeping berth, whilst meeting a cross-section of ordinary Russians. No further registration is required in a city where you spend less than 3 working days.

So let’s spend a day in Novgorod, a comfortable overnight journey north from Moscow.

Now that’s Novgorod the Great, the capital of a 14th century republic and one of the most important historic cities in Russia. Don’t confuse Veliky Novgorod (Russian: Вели́кий Но́вгород), with Nizhny Novgorod (New Novgorod) a much larger city.

Even Russians can get it wrong: Alex, my Moscow host, escorted me to Kievskaya Station, where he confidently negotiated my purchase of a ticket which would have transported me 500 km in the opposite direction, to the city formerly known as Gorky, on the banks of the mighty Volga. Luckily, I picked up the error in good time – see our Post about reading your train tickets.

At its peak during the 14th century, Novgorod the Great was the capital of the Novgorod Republic and one of Europe’s largest cities. In 1992 UNESCO recognized the monuments around this ancient city as a World Heritage site.

Embarking at Moscow’s Leningradsky Station, I arrived early next morning in Novgorod the Great after a very classy train ride, complete with airline-style prepacked meals and glossy ‘inflight’ magazines. 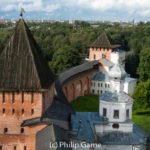 The Kremlin wall, Novgorod the Great 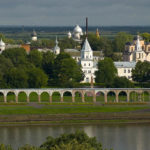 Looking across the Volkhov R. to the 13th-17th C. Yaroslav’s Court, Veliky Novgorod (Novgorod the Great) 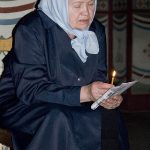 Even the baggage store at the station was not due to open for some hours yet, let alone anywhere to buy breakfast.  Tramping through the historic walled Kremlin and across the river to the old town, a very sleepy place of tree-lined streets and rows of crumbling 18th century townhouses, I fell on a small cafe which was about to open its doors for the day.

Most of the historic churches were in varying states of disrepair, no painted onion domes as these were a later development.  Every little church is set up as a state museum in its own right with a beefy woman as gatekeeper and at least one more to assist, if not several.

The oldest church in Novgorod is the eleventh-century Cathedral of St Sophia within the Kremlin, basically a park dotted with historic structures.  St Sophia was the only one still functioning as a church, the walls covered in faded paintings of saints, row upon row.  Services are a sight to behold, all the congregations’ voices chanting in unison, priests swinging censors, grannies – plus a surprising number of smartly-dressed younger women – genuflecting and crossing themselves before each and every icon.  If the church administrators allow photography for a fee, the parishioners may still object.

And so back and forth all day, until mid-afternoon when the first shafts of sunlight appeared and from thereon it was beautiful with only sporadic sunshowers.  I climbed up on to the brick wall which encloses the Kremlin – every town traditionally had a kremlin, or simply castle – and snapped away at views out over the wide Volkhov River, of the golden domes across through the trees and of the other watchtowers all along this wall, which is several centuries old.

Finally I walked back across town to the station, a pleasant stroll in early evening sun across parks and past the opera house and various monuments, roads busy with trolleybuses and pedestrians heading for their homes. I could have been anywhere in central Europe. A smooth journey back to Moscow, some interesting conversations with the other 2-3 passengers sharing my сompartment and a reasonable night’s sleep in an upstairs bunk.  And I had never ‘left’ the capital.