As we depart western Easter we move towards the orthodox Easter traditions from Eastern Europe and Russia. This writer has gathered together a collection of Russian and Ukrainian decorative, painted and carved, wooden Easter eggs. Found at assorted markets during past travels. We like to collect objects from our travels that can have some use. These are only displayed at Easter time. 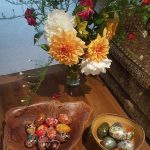 Carved and simple painted to left. Autumn flowers from garden of home office! 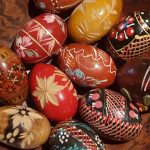 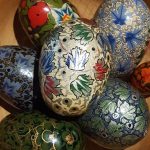 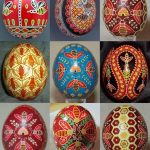 Due to an interest in bee keeping I have added an image showing a bee theme and here follows today’s folk history lesson on that thematic. Next time I visit these regions I am on the hunt for some bee eggs!

Bees were sometimes depicted on pysanka as a symbol of hard work and pleasantness, and represented all the good insects which should not be killed. In Ukraine, it was the custom to place at least one Pysanka egg beneath each bee hive to insure good production of honey.

The art of the decorated egg in Ukraine, or the pysanka, probably dates back to ancient times. Christians embraced the egg symbol and likened it to the tomb from which Christ rose. Pysanky were thought to protect households from evil spirits, catastrophe, lightning and fires. The word comes from the verb pysanka, “to write”, as the designs are not painted on, but written with beeswax. Bees were sometimes depicted on pysanka as a symbol of hard work and pleasantness, and represented all the good insects which should not be killed. Pysanky are typically made to be given to family members and respected outsiders. To give a pysanka is to give a symbolic gift of life, which is why the egg must remain whole. At least one egg was placed beneath the bee hive to insure good production of honey.